Of a sweet and a Sweetmeatmaker

“If you offer someone a sweet, the chances are they will smile
And perhaps that is worth something”

This is exactly what happened to me on entering the famous mithai shop of Joshi Buddakaka Mahim, Kishore Purshottam Joshi, co-owner of the shop which belongs to the eighth generation of the Buddakaka family,who has been running this quaint  sweetmeat shop in Bombay since the 40’s from  the heritage building “Empire Mahal” at Dadar T.T.Originally from Pushkar, Rajasthan,the Buddakaka family had settled here for almost 300 years.Kishore Purshottam’s  forefathers in the interim period  moved to Jamkhambalia, a small village in Gujarat, from where their sweetmeat enterprise first began on a small scale, manufacturing and selling  sweetmeats door-to–door.They were the pioneers of the famous Indian sweet – the Mahim halwa.It was first conceived by his great grandfather in 1780s and proved a great success The enterprise grew from strength to strength with all family members’ full participation which can be seen till to date.

A man of spirit and conviction, Girdhar Mavji one of Kishore’s forefathers,knew where his ambitions lay  and dared to walk from Gujarat to Mumbai in the 18th century,to set up shop here. He explored the markets and decided on Mahim.Mahim in those days was a small village whose inhabitants included Kolis,Kharwas from Gujarat and many other communities who took to this sweet – technicolour translucent square pieces,made by mixing malt,sugar,wheat extract clarified butter and dry fruits, stirring them under heat for 30-35 minutes. The creamy liquid is then poured over wooden pads and stretched. The more it is stretched the thinner the layer.It is then sprinkled with dry fruits and left for four hours after which it is transferred on to thin butter paper to set.
Why the name Mahim Halwa? Was it because it was made in Mahim first as the first shop was set up in Mahim, in Kapad Bazaar. Kishore Buddhakaka was not very sure how the name came about. And what of the name “Buddakaka? The name was probably coined  because of the respect given due to the founder fathers  who conducted the business from the shop at Mahim bundar.The customers called him ‘Kaka” Joshi,was the surname.They were all Brahmins from Pushkar who migrated to Saurashtra. Booming sales and success of the shop at Mahim subsequently led to the establishment of two other shops in Tardeo and Dadar T.T while the main manufacturing unit remained at Mahim.
“We have workers from Gujarat and Rajasthan for generations who have been specially trained in the art of sweet meat making. We look after all their needs like food and accommodation. In fact they are almost like an extended family. Some of them start as cleaners and slowly through observation graduate to the level of manufacturing the sweetmeats. We have about 30 workers now owing to recession, but still the demand is more.
A unique characteristic of this family unlike any other families having traditional enterprise is that the extended family comprising uncles and their children have all taken interest in this business despite alternate attractive career options and varied opportunities. Says Kishore “Some of my cousins are doctors and lawyers who devote time to this enterprise after  office hours  and during festive season  give their time for almost the entire  day. Women also help during peak season” 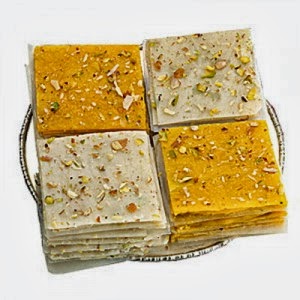 On entering the kitchen I found it spotless and odourless and one can’t tell that sweetmeats were made here all day. The workers are well looked after and that’s why they have been with them for generations. Adds Kishore “We are unconcerned about competition as we know those who like this sweetmeat will definitely buy it.Children are attracted towards it because of their attractive colours and the fact that they just melt in the mouth.”
The variety of Indian sweets is phenomenal and many of them are associated with specific events like marriages and festivals, they are also symbolic as gestures of good hospitality. Indian sweets are eaten anytime – at the end of the meal or as a snack, at celebrations at the start of new ventures in fact on any auspicious occasion.But the Mahim Halwa with its special flavor is unique with its special flavour and colour.Just as a trip to Bombay is incomplete without sampling its bhelpuri, pani puri and vada pau, a bite of this sweet translucent piece is a must.
A “sweet” enterprise for sweet tongues!!!!!!!
Posted by Unknown at 10:14