Bombay's ubiquitous black and yellow taxis have been there ever since I can remember only their drivers have changed. Those days fiats and ambassadors were seen in large numbers. The taxiwallahs of yesteryear Bombay were mostly Marathi speaking from distant villages in Maharashtra  who came to Bombay to earn a living. They were polite, courteous and very protective towards their passengers and took you wherever you wanted to go without making a fuss, however circuitous the route was. Holding friendly conversations with them was a regular feature sans much probing. Generally a phrase often coined in Marathi ' kai haal chaal  chale ahe. The taxiwallahs seem to know everything about the city -----from politics and political agenda of various parties  to filmy gossip, to daily lives of the  passengers; he was a wealth of information. Many of the passengers would have their regular taxis  so they could continue their conversation of the previous day. Traffic was a smooth flow hence the focus was often not the road but observing the expressions of the passenger. Manouvring the taxi around was easy.


With the influx of migration in the 60s and 70s to Bombay  people came  on business or with the intention of settling down. With them came others looking for lucrative jobs and among them were jobs as  taxi drivers . The change was  subtle that of taxi drivers changing hands . There were many Sikh taxi drivers who came from Ludhiana, Amritsar and  Jullunder with their kith and kin. They settled in areas like Sion and Wadala and other suburbs where cheap housing was available. They lived in ghetto like communities . Most of them were truck drivers also who drove both within the city and outside .Soon these settlements began to expand and one could observe almost every taxi being driven by Sikhs.  Many of them could speak Marathi but they didn't, others resisted vehemently . Thus began the clashes between the two sets of community giving rise to a mini gang war, causing disruptions in the long queues . These heated exchanges often took place  near railway stations, bus stations and other strategic venues .The passenger was totally confused . Gone was the bonhommie between the taxiwallah and the passengers . Instead there were sneers and swear words all the way.  As a college student I witnessed  several such heated arguments  and getting into a taxi of rival taxiwallah was always threatening. The Sikhs and the Jats ( by then they had also joined the gang) were rough and bulky  also rough in their language as compared to the puny local taxiwallah  for whom loud abuse was unheard of. But soon they were too hurling the choicest abuses !!! Idle taxiwallahs soon got into abusive habits  like gambling  and  eve-teasing . This was a major break in the relations between the passenger and the taxiwallah . There was no improvement in their behaviour . Occasionally one did come across a do gooder.


The eighties nineties and thereon saw a spurt in UP and Bihari taxiwallahs  who are even more vicious, manupulative and abusive  though I have come across many who are so  aware of the situation in the city. I see many of them reading newspapers and holding discussions with like-minded folks . It is possible to hold a conversation with them on the especially on the trials and tribulations and the changing city scenario. Driving through the crazy traffic hour they have no qualms about talking on cell phones , stopping without the passengers consent for a paan from the roadside vendour  or gutka packet or even to use the urinal. Pelting Bollywood numbers from their stereo gives them a high  and one has to tell them to stop the infuriating music .
Their mental makeup is so varied  Some sadists often peer in the mirror placed at an angle  to watch young couples sitting behind and the taxiwallah weaves his own fantasy and smirks wickedly . Others watching you with furtive eyes even when you are anxious to reach your destination. The Bombay taxiwallah is very very perceptive, mind you . He can tell a passenger from his talk and attire. One is always vary of him.  There are yet others who are helpful in calamities and crisis.   Their unions are powerful and can Strike during the most vulnerable moment and are always up in arms at a drop of a hat. Their territory is well defined and they have the upper hand if they do not want to ply in a particular area.They are rude most of the  times, moody at all times, and fleece you. So choose, folks want you want.
The Bombay taxiwallah, can we really do without them ----no we can't so endure  them and hire them as only can they lead you to your destination. 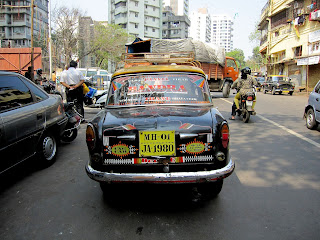 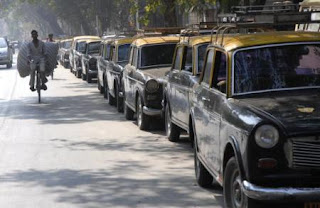